Happy Independence Day – Our great republic, if we can keep it….

Calvin Coolidge is a great president that that very likely you haven’t heard much about.  [30th President; “Step by step he went up the political ladder to Governor of Mass. and VP; became President upon Hardings’s death. Stood for economy in government.” “Prosperity President” “Strike Breaker And Peace Maker”] In Philadelphia on July 5, 1926, the 150th anniversary of the Declaration of Independence, President Coolidge gave a detailed speech putting the declaration in modern context.

The following are some excerpts of that speech which will hopefully encourage you to read the whole thing.

Great ideas do not burst upon the world unannounced. They are reached by a gradual development over a length of time usually proportionate to their importance. This is especially true of the principles laid down in the Declaration of Independence. Three very definite propositions were set out in its preamble regarding the nature of mankind and therefore of government. These were the doctrine that all men are created equal, that they are endowed with certain inalienable rights, and that therefore the source of the just powers of government must be derived from the consent of the governed.

It is often asserted that the world has made a great deal of progress since 1776, that we have had new thoughts and new experiences which have given us a great advance over the people of that day, and that we may therefore very well discard their conclusions for something more modern. But that reasoning can not be applied to this great charter. If all men are created equal, that is final. If they are endowed with inalienable rights, that is final. If governments derive their just powers from the consent of the governed, that is final. No advance, no progress can be made beyond these propositions. If anyone wishes to deny their truth or their soundness, the only direction in which he can proceed historically is not forward, but backward toward the time when there was no equality, no rights of the individual, no rule of the people. Those who wish to proceed in that direction can not lay claim to progress. They are reactionary. Their ideas are not more modern, but more ancient, than those of the Revolutionary fathers. 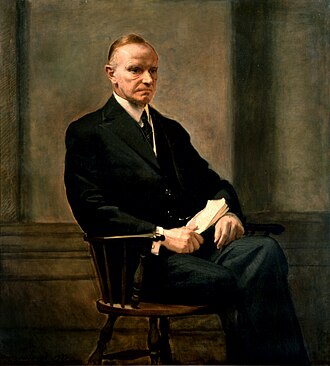 Under a system of popular government there will always be those who will seek for political preferment by clamoring for reform. While there is very little of this which is not sincere, there is a large portion that is not well informed. In my opinion very little of just criticism can attach to the theories and principles of our institutions. There is far more danger of harm than there is hope of good in any radical changes. We do need a better understanding and comprehension of them and a better knowledge of the foundations of government in general Our forefathers came to certain conclusions and decided upon certain courses of action which have been a great blessing to the world. Before we can understand their conclusions we must go back and review the course which they followed. We must think the thoughts which they thought. Their intellectual life centered around the meetinghouse. They were intent upon religious worship. While there were always among them men of deep learning, and later those who had comparatively large possessions, the mind of the people was not so much engrossed in how much they knew, or how much they had, as in how they were going to live.

One thought on “Calvin Coolidge – Declaration of Independence 150th Anniversary”